This is a model that is being marketed as premium but is affordable.

Napoleon is currently one of the strongest names in outdoor grilling, and for a number of good reasons. They produce high quality grills in the midrange and upper segment of the market, using quality materials and excellent craftsmanship.

The company has also become known for using innovative features that are ahead of the curve, and some of those innovations can be found in the Lex 605 Napoleon Natural Gas Grill.

This is a model that is being marketed as premium but is affordable, and it includes every feature that you could want in an outdoor grill, while also adding some that you might not have expected.

It’s time to take a closer look and see what you could look forward to if you make this your next purchase.

Is This the No Compromises Grill That You’ve Been Looking For?

If you’ve been looking at grills to buy then you would have probably found that no matter what price point you look at, there are usually compromises to be made.

Sometimes you need to sacrifice features for build quality, and at other times you have to choose price over a fully functioning grill.

Napoleon didn’t set out to make the most affordable grill on the market, but they did want to offer a model that was affordable in the premium sector, offering features that you would expect to find on models that cost much more.

This review wouldn’t be complete without addressing all of the features that come on the Lex 605 Napoleon, while explaining how they can benefit your grilling sessions at home. 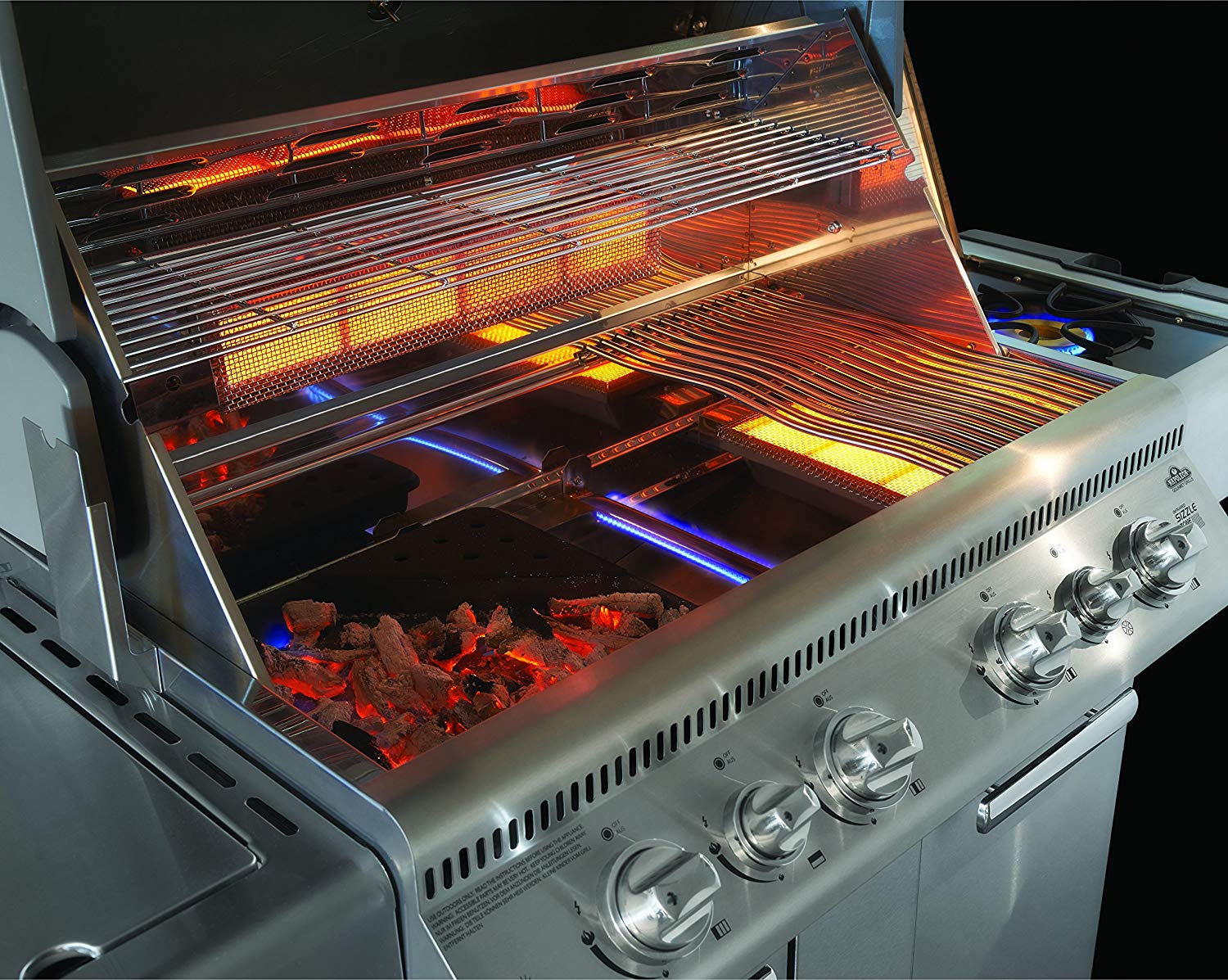 The first feature and the most obvious one, is the fact that this grill has six independently controlled gas burners. These are high quality stainless steel burners that provide even heat across the cooking surface.

Why is it important to have so many burners on a single grill? It simply means that you can control different temperature zones for different types of food, or, you can crank them all for some searing heat inside the grill for any kind of ingredients that you’re working with.

If you’ve struggled with an old grill that only offers you one or two burners for your cooking surface, then the versatility of six will put you into a completely different league.

Cook meat on one side of the barbecue, and then have vegetables or even a pizza on another. There will be no burning, no odd cooking times, and you’ll be in complete control.

If you’re cooking with the lid down, then you’ll find the integrated thermometer to be indispensable, and it’s one of the most accurate thermometers that you’ll find on an outdoor grill. 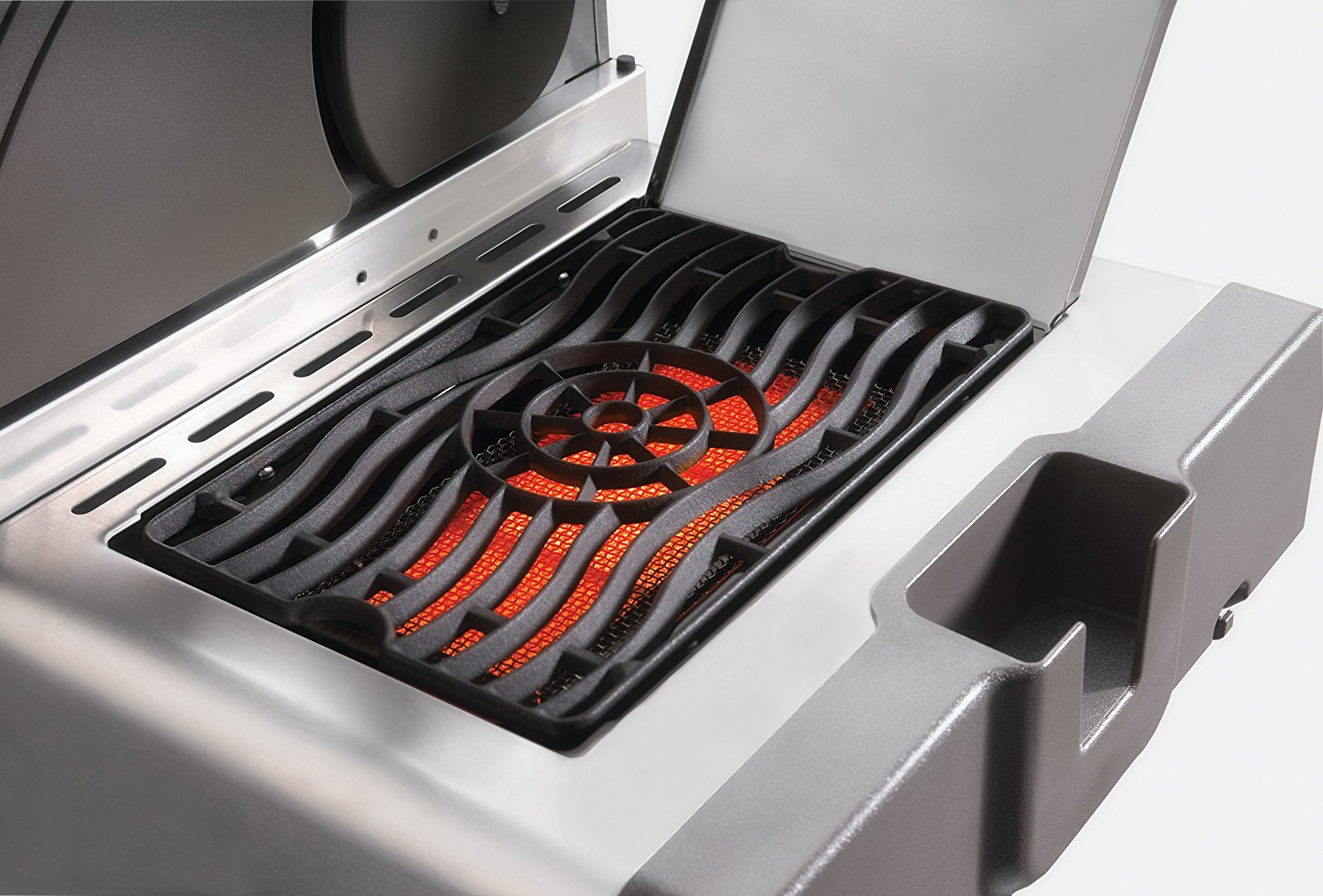 On one of the side shelves you will find a range side burner.

A six burner grill would be impressive on its own, but that’s only the start of what the  Lex 605 Napoleon  Grill has to offer. On one of the side shelves you will find a range side burner.

Designed so that you can add a separate skillet or pot outside of the main cooking area, this addition can completely change the way that you cook outdoors.

You can stew, prepare sauces, or simply expand your cooking area so that you can get more done at the same time.

If you love to have guests in the summer, then you won’t have to worry about finding the space to cook all of the food.

Family gatherings, sports parties, or some quiet grilling with friends can all be made easier with the sheer amount of cooking space that you get on this model.

The total cooking area is an impressive 920 square inches, which is approaching commercial size.So far you’ve got six burners and an integrated range side burner, and the Lex 605 Napoleon is already shaping up to be a versatile cooking appliance.

There’s one more major trick that this grill has, and it’s the ceramic infrared rear burner.

Infrared heating is becoming more common in cooking, but it’s not something that most people are used to on a standalone outdoor grill.

Infrared heat can penetrate right through food to cook it from within.It can also be used to create extremely high temperatures to achieve a quick sear that locks in moisture and flavor.

It (infrared heat) is also suitable for rotisserie cooking, which is another option that you will have with the Lex 605 Napoleon.

Infrared technology is often seen on specialty grills and some smaller indoor cooking appliances, but with this model you’ll be able to make use of it any time that you’re grilling outdoors.

It can be difficult to convey just how much of a difference an infrared heat source can make, and it’s something that you’ll swear by if you make this grill your next purchase.

With all of these options, there’s really nothing that you can’t cook with the Lex 605 Napoleon.

Anything that you would normally cook on a grill you’ll be able to do on this one, but you’ll also be able to cook whole chickens, rotisserie meat, large cuts, and you could even roast or bake inside this grill.

Cooking muffins, cakes, pizzas, or even bread, it’s all possible with the Lex 605 Napoleon, and the hood and thermometer will ensure that you can get optimal cooking temperatures.

Most owners will find that the warmer months will mean that most of the cooking is being done with this grill, and because it runs on natural gas it is much more efficient and cost effective than using a conventional electric oven or stove top.

As a final benefit to anyone that purchases this grill, Napoleon has made the main grill large enough that a charcoal or wood smoker tray can be used inside, which means that you can get authentic charcoal or smoked flavors while gas grilling. 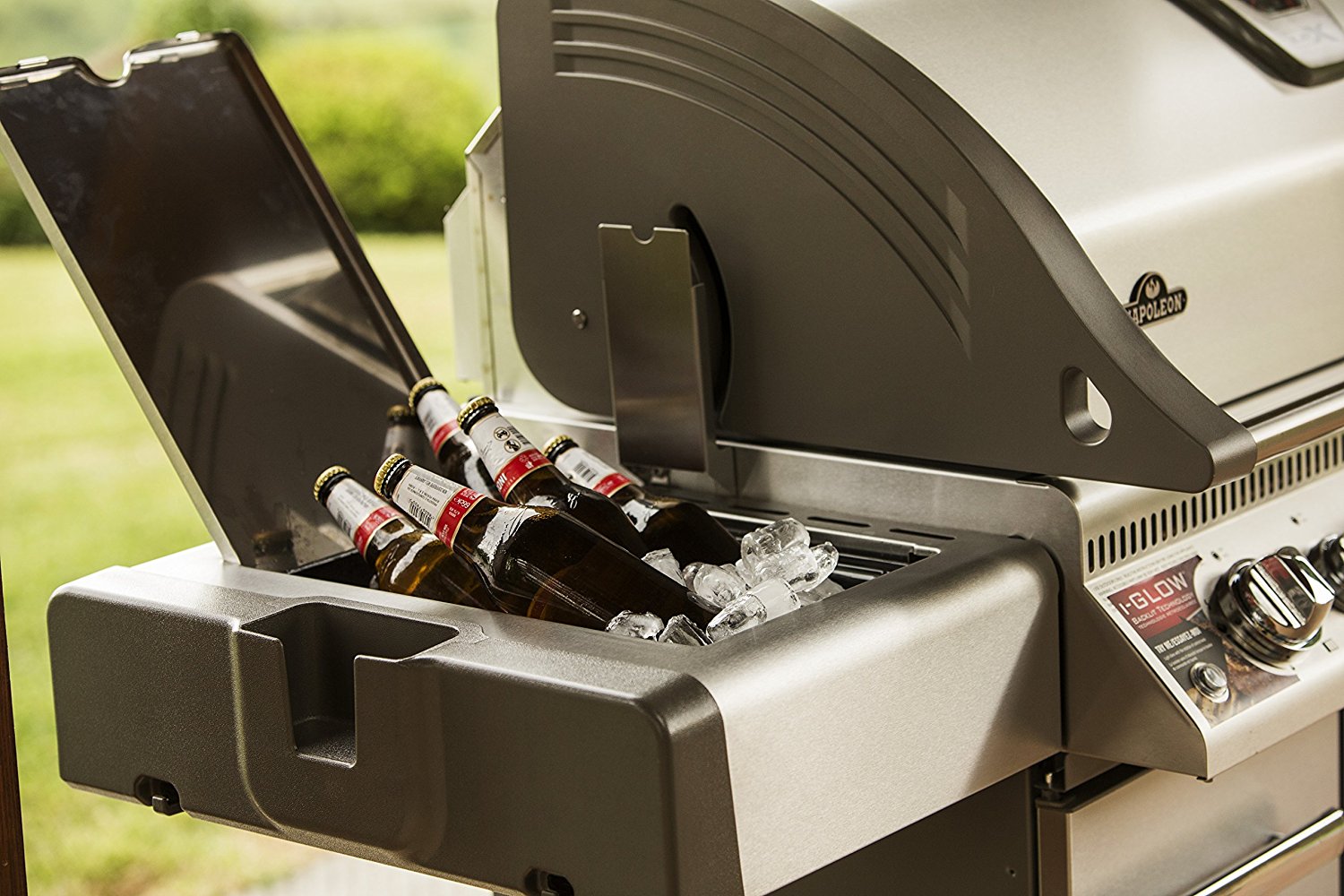 Although not strictly part of the cooking area, the Lex 605 napoleon Natural Gas Grill also incorporates a multipurpose bucket tray into the second shelf.

This can be used for marinade or ice, or anything that you choose to put in there.

On top of the integrated bucket is a cutting board, further reinforcing the fact that this model is a serious standalone cooking station.

Construction Quality is Easily on a Commercial Level 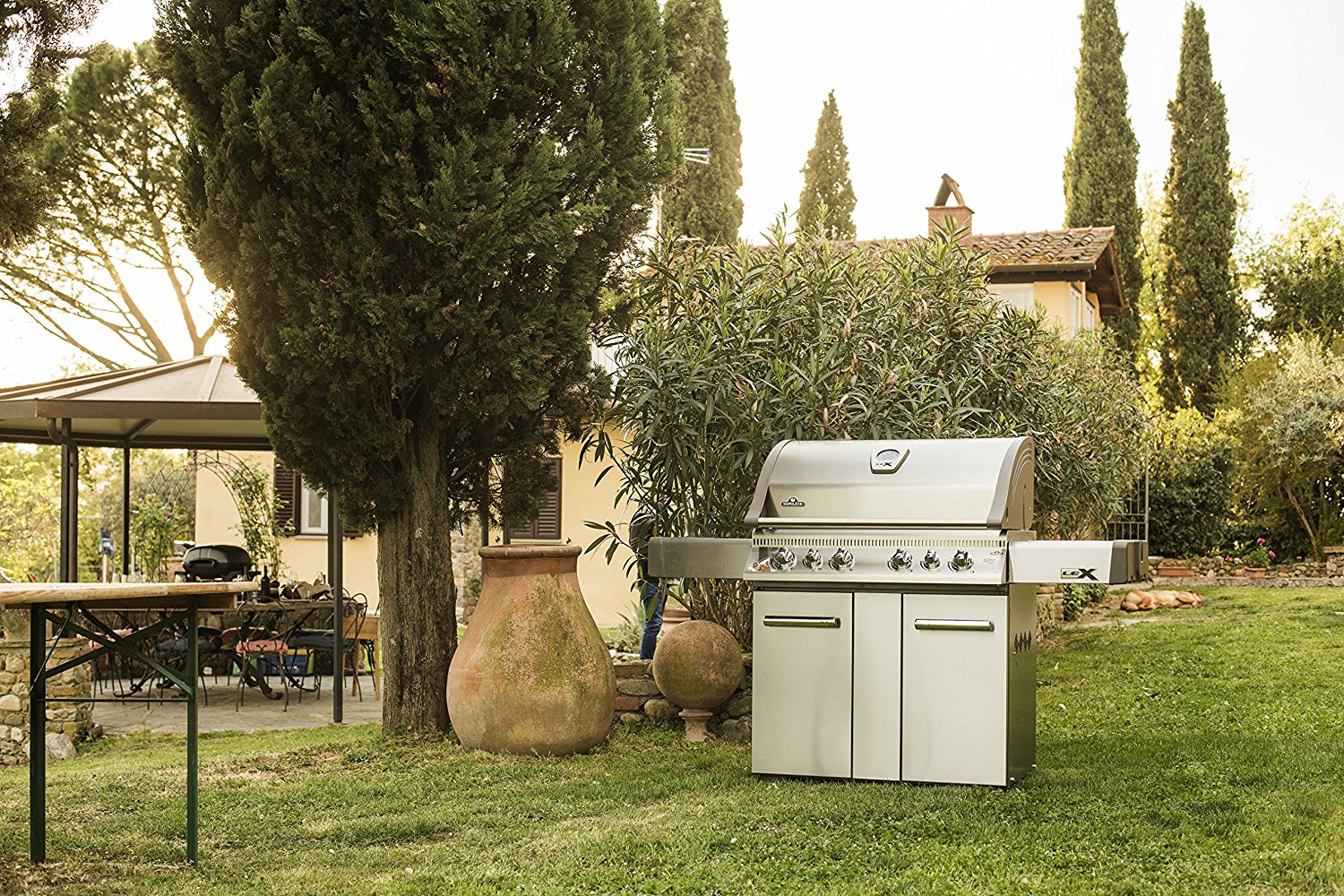 It is also manufactured to a standard that goes beyond the average home grill.

When reviewing the LEX 605 Napoleon, it become apparent that the designers wanted to create something that was suitable for the home, but that would be on the level of commercial products.

The large cooking surface and the multi function cooking features were the first indicators, but it was the construction quality that provided final confirmation.

If you’ve ever seen a good looking grill that just didn’t feel well made when closely inspected, then you will have a lot of appreciation for the Lex 605 Napoleon.

Not only does it look amazing from a distance and up close, but it is also manufactured to a standard that goes beyond the average home grill, even some of the more expensive ones.

The double walled stainless steel lid is a feature that is usually reserved for grills that cost much more. The double wall is not just about insulation.

It’s a design feature that protects the outside layer of steel from tarnishing from heat.

If you’ve ever used a stainless steel grill you will know that the areas subjected to heat will patina and change color over time.

There are no negative consequences beyond the cosmetic change, but it’s something that you don’t want to see on the outside lid of your high quality barbecue.

By using the double walled design on this model, Napoleon has ensured that the grill will always remain presentable.

Not every aspect of the construction is polished stainless steel.

To create some cosmetic differences there are steel parts that have been treated with porcelain enamel, and cast aluminum has also been used in parts of the base.

To use stainless steel everywhere would significantly ramp up the cost, and cast aluminum is not only sturdy, but it helps to ensure that the weight doesn’t turn this grill into a brick that can never be relocated.

As it is, the grill weighs almost 300 pounds, so using lightweight alloys wherever possible is a smart decision on behalf of Napoleon.

It’s impossible to say with absolute confidence that a grill will last for a lifetime, but it’s easy to see one and know that it will last for decades with the right care.

This is one of those grills that would be close to new in ten years, so if you want a long term investment in an outdoor grill, then this is one model that won’t disappoint you. 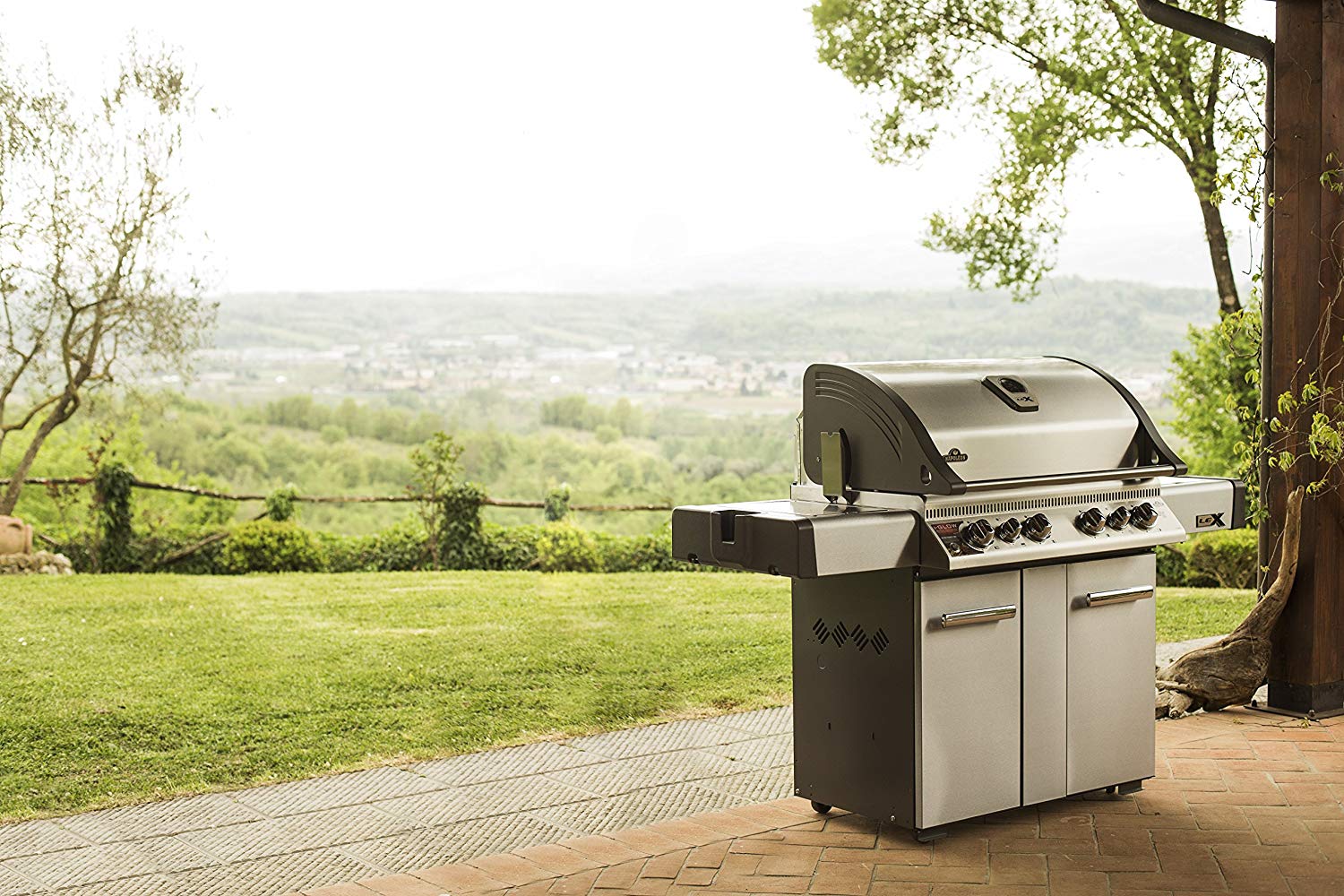 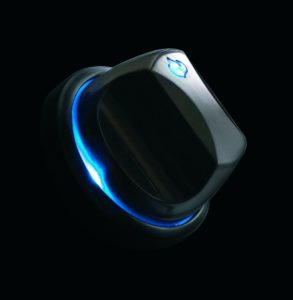 Some of the small touches add a feel of quality and attention to detail that make the grilling experience more pleasurable.

The control dials are backlit by blue LED lights which are rated to last for 30,000 hours.

Small touches like these add to the already premium feel, and although these aren’t the kinds of features that will make or break a product, they do show that a lot of thought has gone into the design and presentation of this grill.

The dials themselves are highly accurate and they feel luxurious to rotate. Again, this rounds off the premium experience that this grill offers.

It’s not often that a grill is reviewed where there are no downsides, but it is extremely difficult to fault the Lex 605 Napoleon.

What Do Owners Think of the LEX 605 Grill?

When reading owner feedback for this grill you will find that it often surpasses expectations, which further reinforces the point that this is a grill that makes few compromises.

Some reviewers have been disappointed that the construction is not entirely stainless steel, which is a valid concern to have, but it’s also something that we have addressed in this review.

No current negative consumer feedback exists for this particular grill, and the LEX series has been well received overall.

Sometimes when looking at grills in this price range, there needs to be a lot of justification made to put the price in perspective.

In the case of the Lex 605 Napoleon Natural Gas Grill, the justification is already in the features and the quality.

Napoleon refers to the LEX series as “an entire outdoor kitchen in one affordable cabinet”.

This is a true statement, and it’s rare to see a company hit the mark so well with a product line. This grill can easily be described as excellent.

It does so much and it does it all above what could be expected. There are no compromises in cooking ability, and the only downside is the weight.

Considering this would ideally be a permanent outdoor fixture, the weight isn’t exactly an issue.

This grill is large and it’s not for everyone. Some people won’t use all of the features, and some simply don’t need a grill of this size.

For everyone else that is excited by the multiple cooking options and the high quality construction and design, it’s highly recommended and it won’t disappoint.

There are far less capable grills for the same price, and that’s why this is currently one of the best grills on the market at this price range. 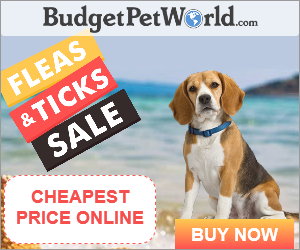 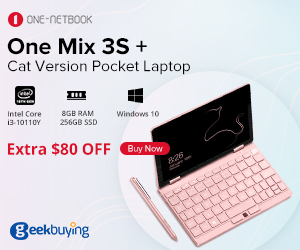 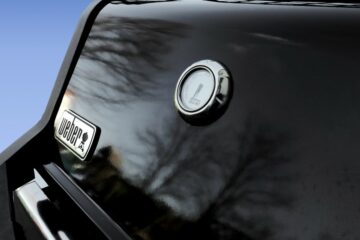 For more than half a century, Weber has been the premium name in American grilling. With strong brand recognition both in the United States and around the world, Weber natural gas grills feature highly in Read more… 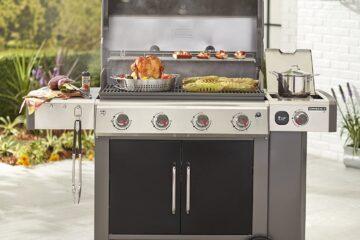 Weber Genesis II LX E-440 – a grill that has just the right amount of features to make the perfect medium sized family grill.I would easily say that Weber grills are considered the “Gold Standard”. Read more… 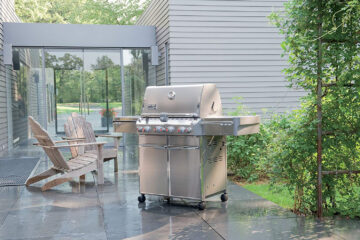 For more than 50 years Weber has been one of the biggest names in outdoor cooking. While the company has existed since 1893, it wasn’t until 1951 that the company introduced their original Weber Kettle Read more…