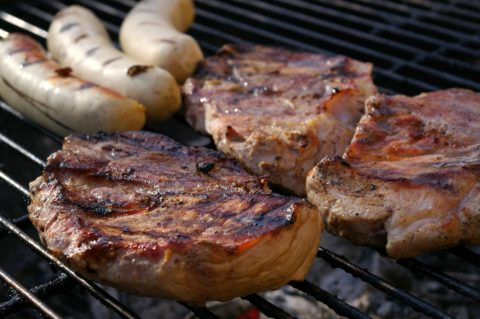 All across the country, people spend 4th of July organizing barbecues for the holiday. Seeing as it is our country’s birthday, it is only appropriate that we usher it in with barbecues and cookouts with friends and family. Barbecue has transcended mere cooking. Over the centuries, it has served as a social gathering and a uniting force. During the first few years of our Republic, Americans all over, organised barbecues on July 4th, not just to celebrate their independence day, but also as a way of reinforcing the core democratic values of their communities.

I’ll like to clear up certain misconceptions before delving into some interesting part of our history: barbecuing and grilling are two different things. Although they’re more often than not, used interchangeably (especially up north), the fact of the matter remains that, these are two different cooking styles. On the one hand, grilling is a basic style of cooking food directly across an open fire or source of heat. On the other hand, barbecue is a kind of slow and low style of cooking food across indirect heat. Due to its long and time coming procedure, barbecued meat tends to soak up the flavour of the smoke and the spice, making the meat moist and tender. Tougher types of meat that require a slow, and even cooking like tri-tips, brisket, pulled pork, and ribs, are more suited to barbecue. Grilling on the other hand, is suitable for food types that cook faster like steaks, hamburgers, chicken, seafood, hot dogs, and vegetables.

Traditional barbecue lovers have always had issues with people who lump grilling together with barbecue. In the year 1954, a journalist known as Rufus Jarman, explained the difference on the Saturday Evening Post, he stated that, “Many Georgia epicures insist that this is an insult to the honorable name of barbecue. You cannot barbecue hamburgers, roasting ears, potatoes, onions, tomatoes, wieners, or salami, and it is a shame and disgrace to mention barbecuing in connection with such foolishness.” Despite all these, a lot of people cannot stop using the terms interchangeably. Regardless of what it is called, one thing is for certain, nothing beats the flavor produced by cooking across an open fire. 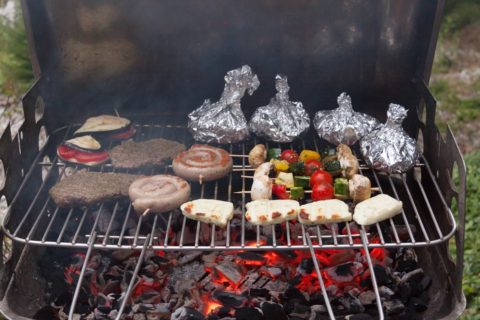 Grilling can be traced back to the days of the cavemen, when one of our ancestors made the resounding discovery that you can cook meat by holding it directly across an open flame for a period of time. The odds are that some of these cavemen came across some animals that died in forest fires, and discovered that it was tastier and easier to digest than when ingested raw. Although I wish I knew who to give credit for this, we don’t exactly know where this cooking style originated from. Anthropologists have not been able to come to a conclusion on exactly when our ancestors learned to cook and prepare meals. The most recent estimate is that it started sometime between 2 million and 300,000 years ago, which is a really wide range. When you talk about grilling, my best bet is that the earliest cave men are responsible for our extraordinary cooking heritage.

Barbecue’s history on the other hand, is a lot easier to connect owing to our increasing culinary curiosity and our insatiable desire to know more about what our ancestors ate. As at twenty years ago, there was barely any information about the origin of barbecue. However, of recent, food specialists have worked extremely hard to dig into the history of barbecue. Today, there are more than 30 books about it. Our love for barbecue as Americans is rooted in the Caribbean. There’s a probability that the word itself, originated form the Indians of the Caribbean Taino, who used to smoke and dry meat across a green stick frame. In his travel diaries “The Barbacue Feast: or, the three pigs of Peckham, broil’d under an apple-tree,” Edward Ward, documented one of the first English Barbecue story. This pamphlet which was printed in 1706 was published in London. According to his account, some English colonists, were relaxing with rum one evening in Peckham, Jamaica, when their stomach started to rumble. They then decided to build a rack made of sticks, and lighted a fire underneath it. After the sticks had been burned down to charcoal by the fire, they placed long wooden spits over the rack, and added three pigs. With their available resources, they created a foxtail “brush” which they dabbed on the meat mixing it with Madeira wine and pepper. They cooked the pigs for a couple of hours before they removed and served them to the spectators. Cooking across a fire was not exactly new, but Ward found the social aspect of barbecuing noteworthy. He further described how they scheduled the event long before the food was to be served. He described how guests assembled to experience every detail of the procedure, starting from the pit construction, down to when the meat was brought down from the fire. According to him, cooking felt like a communal experience.

Barbecuing as a cooking style journeyed from its roots in the Caribbean, down to Virginia, then it further travelled south across North and South Carolina, the Appalachians, Georgia and down to Kentucky and Tennessee. After that, barbecuing entered the west, as more Americans started to settle down in the West. It hit the state of Texas in the early part of the 19th Century, and it made a huge impression, and then went through the entire Southwest before arriving at the Pacific coastline. Barbecue has become popular across the nation, but it has a deep cultural significance in the Southern and Western States.

Barbecues in the early colonial era, were mostly loud and unruly, filled with heavy drinkers. In the early part of the 19th century, the temperance movement altered all that, and with time it became a civilized event where communities could come together and bond. This style of cooking attained political significance in the civil war years. A lot of families began to form the habit of organizing public barbecues to gather support and encouragement for the troops.

Barbecued foods did not become available for commercial purposes until the 1890’s. Before then, barbecue was prepared as part of a potluck-style communal meal. As its popularity increased, a lot of men who thought of themselves as experts in this field realized that there was a market for it and started charging people to barbecue for them at public events and holidays. At the beginning, they used temporary tents that could easily be moved to cook the food, eventually; the tents were transformed into permanent structures, which later became the first set of barbecue restaurants. As barbecues continued to gain commercial popularity, backyard barbecues which were known as “cookouts” also became more popular.

Also, barbecue has a huge connection to African American culture. It’s slow and time consuming cooking process, as well as it’s cheaply cut meat was often utilized, making it a cheap means of feeding. In the South, a lot of poor black families, incorporated barbecues as affordable means of cooking and enjoying meat, and it eventually became one of their main soul food meals. In the early part of the 1900’s when blacks moved North, they took barbecuing along with them. By the middle of the century, there were lots of barbecue restaurants run by black families in different cities all over the US. 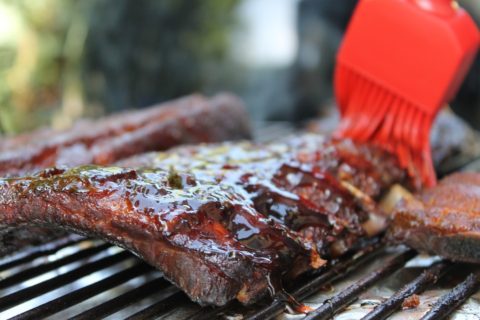 For a lot of Americans, barbecuing has become a source of pride. Many barbecue contests that were introduced in the 1980’s now hosts gatherings of more than 100,000 persons. All the states now have their own style of barbecue that is particular to them, with different types of meat, sauce (or lack of), side dishes, down to the type of wood that is used to cook it. South Carolina is widely popular for their pork barbecue that comes with a mustard sauce; Kansas City uses beef brisket and sometimes sliced turkey across hickory, oak or even pecan wood, along with a delicious tomato sauce; while in Texas, they cook their beef across open mesquite fire in what is often referred to as a “cowboy style” and mostly served without any type of sauce; while they use pork ribs as well as pulled pork sandwiches with a thick delicious sweet molasses barbecue sauce in Memphis.

Regardless of how it is served, one thing is for sure, barbecue has a way of bringing people together. And grilling is no different.