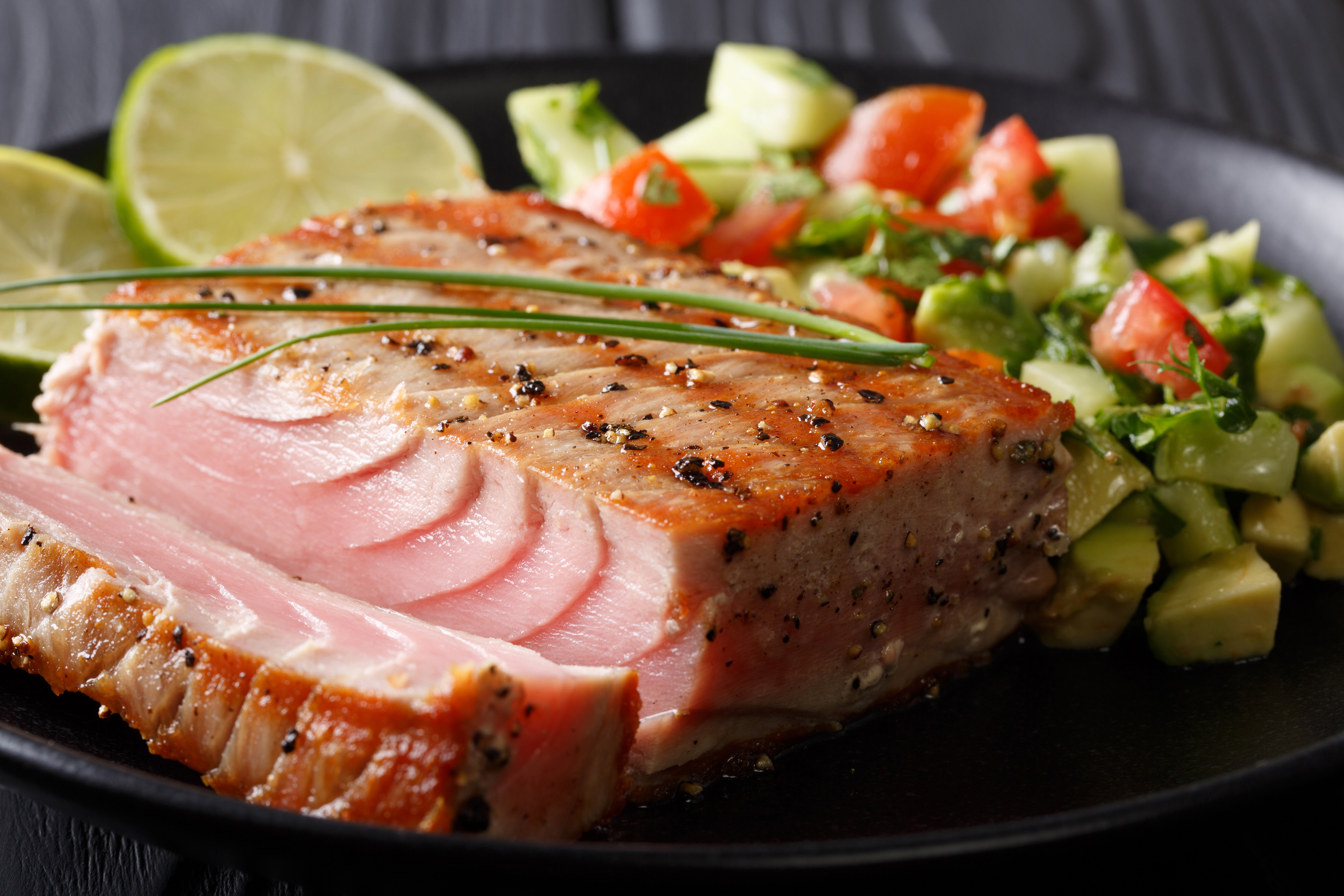 Many questions come to mind when grilling fish, due to its grilling difficulty. Do I need to cook it on high, medium, or indirect heat? For how long should I cook it?

How do I season the Tuna? Do I need a basket? Do I need to oil the grill or the fish? These are just but some of the questions, but after going through this detailed recipe of how to grill tuna, all your questions will be answered.

Skip the restaurant and follow this savory Grilled Tuna Steak recipe at home!

To set the ball rolling, you first need to familiarize yourself with what type of fish Tuna is and all the basics surrounding its preparation. Tuna is the best as well as the easiest fish to grill. It is a dense fish, with not too much fat and has a light flavor.

Basic seasonings help spice up its taste to an amazing savory taste but it also works well with almost any seasoning.

Brushing tuna with some oil and light seasoning with salt and pepper gives you a great piece of fish, as the topping provides an added flavor as well as moisture to the meal.

Nonetheless, you can also marinade the tuna but with mild marinade, as anything with a lot of acids tends to cook the fish before it hits the grill.

To help you out, you can go with some olive oil, herbs, spice, and a small amount of flavored vinegar or lemon juice.

Regardless of whether you grill it to rare or even medium, it still retains its excellent taste. Moreover, it is lean and tends to dry out quickly on the grill.

While marinating and applying oil to the fish tends to help, cooking beyond medium-rare makes it dry.

To tackle this while on the plate, serving grilled tuna with a sauce or some kind of salsa is recommended.

Grilling offers you two ways of preparing tuna. The first method involves grilling it over high heat for about 4 to 5 minutes per side until it is cooked through.

The other method is to grill it over very high heat for about 1 to 2 minutes per side. The second method, however, scares more than a few people since it leaves most of the fish raw.


Cooking Through Vs. Searing: What You Need to Know

If you decide to grill a piece of tuna that is about 1-inch-thick, then grilling it for about 8 to 10 minutes and flipped once is ideal.

This will get through, to the middle of the tuna steak given that your grill is well-functioning and hot. However, you need to get the tuna off the grill before the surface starts to get crusty and burns.

Unlike beef, lamb, or pork, tuna doesn’t have the “rest period” before serving. You just get it off the grill and onto the plate immediately.

On the other hand, for the seared tuna, preparation is pretty much the same way you would if you were to grill it completely. A light brushing of oil, some salt, and pepper is enough to get you going.

The difference with searing is that you need a very hot grill. The reason you want this kind of heat is that you will be grilling the tuna for about 90 seconds each side.

Getting a super thick cut of tuna, like a three-inch-thick block and then searing it on four sides, or six if you can get it cut just right, is pretty good. The six-sided cube grills for only about 45 seconds per side, for a total of four and a half minutes.

This thus gives you a well, all-round seared crust piece of tuna that’s also heated in the middle. 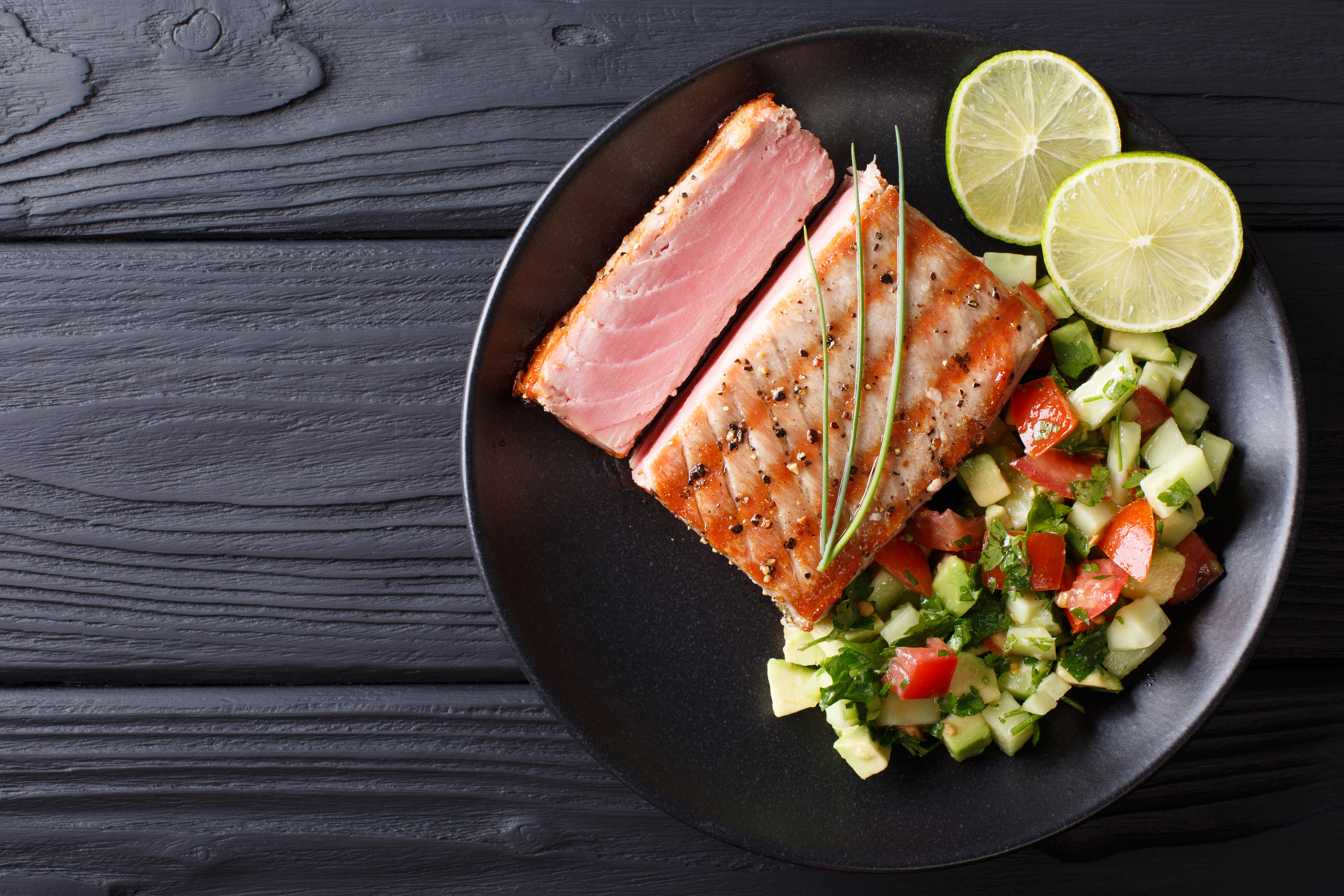 Loosely covering the grilled or seared fish with aluminum foil and serving it within 15 minutes delivers the best results.

Also, seared or grilled tuna goes along served well with a nice wasabi sauce or a balsamic reduction. The latter involves boiling balsamic vinegar until it gets thick.

However, if you are going to cook and hold the fish, sprinkle the lemon juice right before you just serve the tuna steak.

Tuna fish is so versatile. As such, you can decide to serve it alone or as an accompaniment to pretty much any dish.

Most people like grilling up the fish with the salt and pepper and then serving it over a salad that’s been dressed with a standard vinaigrette.

Prep time, cook time and no total mine depends whether you are cooking through or searing, as well as if you are marinating or not. Let’s make it!

While preparing tuna, always look for a good cut of fish. This means that the color is deep red and even, without any dark patches.

Tuna is a great fish for grilling and is very unlike most of any of the fishes that you have ever grilled. Its uniqueness and easy grilling make it worth giving it the shot!